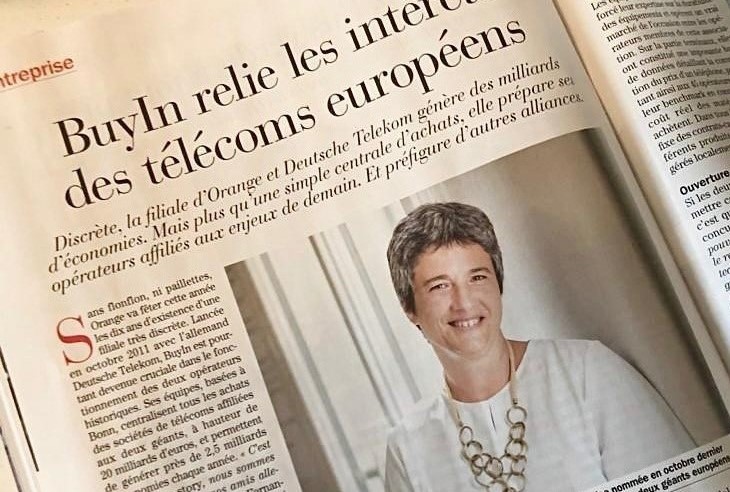 January 14, 2021 / Béatrice Felder, BuyIn’s CEO, and Ramon Fernandez, Delegate CEO of Orange and Chairman of BuyIn’s Board of Directors, are featured in Challenges Magazine to highlight the strengths of the alliance and its international perspective.

Read further for the article translated. As soon as the article will be available online, we will post the link.

Quite discreet, the joint venture between Orange and Deutsche Telekom generates billions of savings. But more than just a purchasing unit, it prepares its partners to face the challenges of tomorrow. And heralds other alliances.

Without sparkles or drums, Orange will celebrate this year the tenth anniversary of a very discreet subsidiary. Launched in October 2011 with the German group Deutsche Telekom, BuyIn has become essential in the operating of the two historical operators. Its teams, based in Bonn, centralizes all the sourcing from telco companies affiliated to the two big giants, up to 20 billion euros and generate around 2.5 billions savings each year.  “It’s a success story, we’re very happy with our German friends”, says Ramon Fernandez, Delegate CEO Finance, Performance and Development at Orange and chairman of BuyIn’s board of directors. “Ten years ago, the two groups realized that they had to join forces to cope with supplier consolidation and market fragmentation.”

BuyIn adds up the order volumes from around 45 operators. Most of them are subsidiaries from one of the two historical operators, mostly in Europe or in Africa. The structure wants to be a model in terms of balancing the two European powerhouses, the archetype of the good understanding between France and Germany. Last October, it’s a French woman who took over the reins of the company: Béatrice Felder, ex-Orange Business Services. “I am trying to forget that I am from Orange”, jokes Béatrice.

Under her leadership, more than 300 employees, representing around thirty different nationalities – unique at this scale – covering all the needs from the different countries where the two groups have a presence. She follows the former German CEO, Volker Pyrtek, who led the entity during nine years. This ex sourcing boss from Deutsche Telekom worked with a French CFO, Geoffroy de Buchet, who just took the lead of the financial department of Orange France. And who also logically left his seat to a pure Deutsche Telekom product, Michael Rubas.

“BuyIn is more than a central purchasing service”, explains Béatrice Felder. “We enlighten the two groups on the big challenges of tomorrow by providing strategic consulting on the new markets, the newcomers or supplier concentration”. Its perimeter is large: if the buying of content stays with the subsidiaries, it intervenes on all the material and software components of the network, up to the terminals used by the consumers. For the change to 5G, for example, BuyIn allowed the two groups to mutualize the testing of the materials suggested by the equipment manufacturers. They are testing them on smaller countries before launching on bigger markets.

The teams in Bonn also strengthened their expertise on equipment durability and thus manage a real second hand market between the alliance members. On the terminal part, they have built an imposing market base detailing the composition of the pricing of a phone, allowing benchmarks for the 45 operators with the knowledge of the real cost of the materials they are purchasing. In all the cases, BuyIn sets contracts for the different products which will then be managed locally.

If the two telco giants can be fine with this close collaboration, it’s because they are rarely in frontal competition. “Since they can’t mutualize their networks, joining forces on purchasing is a technique that allows to capture a big part of the synergies generated by a fusion”, observes Stéphane Piot, partner at the consulting company, Analysys Mason. And their cooperation is under very strict compliance rules. The objective is to have some weight against the suppliers whose number was greatly reduced: Nokia, Ericsson, Samsung or Huawei capture most of the market.

Unity creates strength. Recently BuyIn is welcomes other operators, the Canadian Bell or the Belgian Proximus – the former operator Belgacom – that have joined the alliance serving more than 500 millions of consumers. “We only work with a new partner if it makes sense for both parties”, comments Béatrice Felder. In plain language, the new partners must be economically and culturally compatible: sharing of best practices, concurrential lanscape, a whole set of criteria is taken into account.

A couple of years ago, Deutsche Telekom and Orange had tried an operational fusion in the UK, when they were creating BuyIn. It was in 2010, the two groups had decided the join their UK subsidiaries and had created the company Everything Everywhere (EE), that they owned equally. But it didn’t work and was sold six years later to BT. In a framework that has the advantage of being less integrated, other operators could join BuyIn.

“It’s a way of building synergies without going up a fusion”, admits Sébastien Soriano, the ex boss of Arcept, who identifies also limits in such a joint venture. “The joint venture works well as long as it’s about basics but it gets complicated when it’s about innovation”.  Djingo, the connected device launched in 2017 by the two operators is here pointed out. Created to compete with Google and Amazon, it was unplugged last October. “We thought there’d be a space to fill in on the market of personal assistants”, explains Ramon Fernandez. “We were right to try but also to stop, considering the resources deployed by the two groups”. Not everything is lost though, as the artificial intelligence developed for Djingo is today included in all the remote controls from Orange.

“The only way forward is Sustainability, also in Procurement”. This was my statement for Earth Day 2021. One year later, this thinking is even more embedded in BuyIn’s DNA as growth cannot be conceived without a strong ethical sourcing at its core. [...]MoreMore

What a ride! Ten years ago, BuyIn was founded by Orange and Deutsche Telekom to align their strategic procurement activities and to generate significant savings. What happened during this decade? [...]MoreMore

We all had to adapt last year but how is it when you start a new job in the middle of a lockdown? Meet Nolwen, who started at BuyIn during these unusual circumstances. [...]MoreMore

External auditors confirm the appropriateness, implementation and effectiveness of our Compliance Management System also with regard to anti-corruption. BuyIn has now successfully completed the certification audit. [...]MoreMore

How to foster talent and determine the best fit between a graduate and a company?  At BuyIn, the answer is easy: we're teaming up with top universities and business schools for hands-on discussions around procurement and career potential in the telco industry. [...]MoreMore

To say that I am proud of being BuyIn’s new CEO is an understatement. BuyIn is the largest telco procurement alliance in the world with an ambitious mission: create value through procurement. [...]MoreMore

The BuyIn Board of Directors has named Béatrice Felder as Chief Executive Officer as of October 1, 2020. She will assume the CEO role from Volker Pyrtek after the conclusion of his contract on September 30, 2020. [...]MoreMore

The All Employee Meeting (AEM) is the highlight of the year for BuyIn’s employees. We were supposed to all meet in Berlin but with no possibility to travel, we made the best out of the situation with live streams from Paris and Bonn. [...]MoreMore

Right before Easter, we would like to share with you an individual initiative at BuyIn from one of our employees, Clément Lamotte. He found a silver lining in the confinement by using his spare time to help others by sewing face masks. [...]MoreMore

Combining technical analysis with cost insights, the TC@P team keeps BuyIn at the cutting-edge of procurement. Meet Sabine (on the left) and Chloé (on the right), two experts from our cost engineering team, outlining why they enjoy working at BuyIn and what makes their job so interesting. [...]MoreMore

One of our greatest achievements is to value our employees and to foster a culture of personal development. Thomas started as a strategic sourcer almost at the beginning of BuyIn and is now Vice-President for the Hardware category. [...]MoreMore

At BuyIn we believe in talents. Meet Sabrina, a former apprentice in the Digital Home Devices team who got hired to continue her stellar path at BuyIn and has just been selected in our Talent Program. [...]MoreMore

In today's complex world, achieving savings is not enough. A digital transformation journey is needed to transform procurement teams from corporate functions into customer-centric service entities that leverage digital solutions to deliver value propositions to their customers. [...]MoreMore

At BuyIn we work at the forefront of innovation and procurement. Read on to know more about this topic I presented at the Broadband World Forum last year in Berlin. [...]MoreMore

For questions or feedback please send an e-mail to: communication@buyin.pro

Interested in joining the Procurement Alliance? Please reach out to: partnering@buyin.pro

Where to find us

BuyIn has central offices in Paris and Bonn and five offices in the home markets of its mother companies.

Strategically located in Central Europe, our locations make it easy for us to reach our customers and for them to reach us.